House of Reps postpones security summit in honour of Army Chief, others

The Home of Representatives has postponed its nationwide safety summit scheduled to carry from Monday, Might 24, 2021, in honour of the late COAS Lieutenant-Basic Ibrahim Attahiru.

The Clerk of the Home, Chinedu Akubueze, introduced this in a press release issued on Sunday, including that the choice was made in honor of the Chief of Military Workers, Lieutenant Basic Ibrahim Attahiru, and ten different army personnel who died in a aircraft crash in Kaduna on Friday. 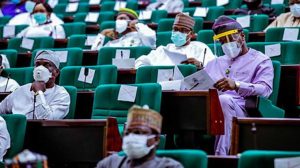 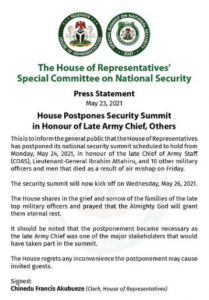 Akubueze additionally expressed the Home’s condolences to the households of the deceased high army officers, praying that Almighty God will grant them everlasting relaxation.

The assertion reads partially “That is to tell most people that the Home of Representatives has postponed its nationwide safety summit scheduled to carry from Monday, Might 24, 2021, in honour of the late Chief of Military Workers (COAS), Lieutenant-Basic Ibrahim Attahiru, and 10 different army officers and males that died because of air mishap on Friday

“The safety summit will now kick off on Wednesday, Might 26, 2021. The Home shares within the grief and sorrow of the households of the late high army officers and prayed that the Almighty God will grant them everlasting relaxation.

It ought to be famous that the postponement turned obligatory because the late Military Chief was one of many main stakeholders that might have taken half within the summit. The Home regrets any inconvenience the postponement could trigger invited friends.”